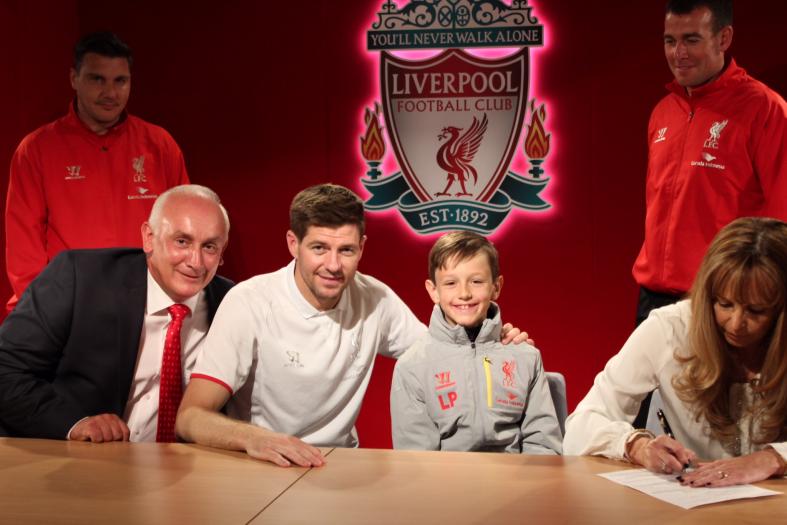 A promising young football player from Formby has signed his first contract with Liverpool Football Club.

Lucas Pitt, aged-eight has been attending training sessions with Hugh McAuley since he was four. His parents attribute his achievement to the professional coaching delivered by Hugh and his team.

Graham Pitt, Lucas’s dad said: “We have known Hugh for six years, the professionalism of his sessions, is second to none.

“The coaches are fantastic, completely focused on developing the childrens’ football skills, whilst enjoying themselves at the same time.”

Lucas, who has been with Liverpool FC for the past four years, will join 16 fellow new signees next Tuesday (19th May) at the Liverpool ECHO Arena, where they will present one of the Liverpool FC Players’ Awards.

Graham added: “For Lucas to sign his first contract at Liverpool, with Steven Gerrard sat with him, was an immensely proud moment for us all. Hugh and his coaching staff should take some of the credit, for which we are especially grateful.”

Hugh was instrumental in the development of Steven during his formative years in Anfield’s youth set-up. Speaking of Lucas’s success he said: “I am delighted for him and very proud. He is, without doubt, very talented and this signing demonstrates the club’s commitment to developing his skills moving forward.

“Lucas’s dedication and determination are exceptional and I wish him every success as he begins the next stage of his promising football journey.”